Sometimes, small acts don’t go unrewarded. This winter, as Josh D. cleared the sidewalks of the apartment complex where Pittsburgh Mercy’s Bellwood Transitional Age Program is located, the manager of the complex noticed.

The person who had been keeping the grounds clean was retiring and the manager offered the job to Josh, who is affectionately called “Joshy” by the Bellwood staff and residents. For the last month, he has been working for an hour a day on Mondays, Wednesdays, and Fridays.

“I mostly pick up trash and empty the cigarette cans,” says Josh, 21, who also collects any debris that falls to the ground from garbage trucks that service the complex. “I know the manager thinks I’m doing a great job.”

He still shovels snow on a volunteer basis, making sure the sidewalks are clean and safe for residents. Keeping things tidy and clean is just in Josh’s nature. Nicole Graff, Bellwood TAP site supervisor, says he even keeps his apartment neat.

Getting back to work feels good for Josh, who worked as a package handler for FedEx before moving to Bellwood TAP in the North Hills in July 2019. Because the FedEx facility is in Clinton, near Greater Pittsburgh International Airport, Josh lost his transportation to work. A ride with ACCESS is $40 a day, according to Nicole.

Fortunately, Josh has qualified for a disability waiver that will pay for his transportation to and from the FedEx facility. Because of the impression Josh left behind at FedEx, he has been put at the top of the list for being rehired to work three hours a day on weekdays now that he has a way to get there.

When he isn’t working, Josh enjoys building with his Lego sets and collecting toy cars. 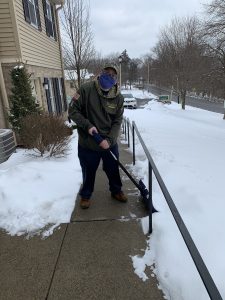