One of the “crazy weather” days in March when it snowed heavily, McAuley Ministries executive director Marisol Valentin had a meeting at Reedsdale Center. As she got out of her car, making sure she walked carefully because she thought no one had cleared the entrance, she observed it was clear—thanks to Lorraine Battle, Reedsdale’s safety officer. 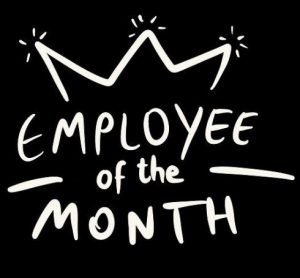 “Even though it was not her job, she took the time to go outside and clean the entrance because she knew that the snow cleaning crew would not be on site for several hours,” Valentin says. “This is just one example of how she embodies safety and community.”

For her many acts of caring for colleagues and persons served, Battle has been named the April Colleague of the Month.

Many people might not know Battle by name, but they may have seen her in the reception booth in the lobby at Reedsdale, greeting people who enter the building or directing them to different classrooms or conference areas in the building. Among the many tasks she performs, Battle tags cars that shouldn’t be parked in the front lot and escorts people who aren’t comfortable taking the elevator to their destination on the second or third floor.

“Being a safety officer at Pittsburgh Mercy is not easy,” Valentin points out. “Everyone has their own interpretation of what your job should be. And she works hard every day to meet everyone’s needs. From helping that staff member who suddenly forgets how to use the key fob even though they come in the building every day, to helping anxious parents understand our processes, to helping that delivery driver who insists they are in the right place even though they are not, she manages and helps everyone with grace. She has been insulted, yelled at and belittled, yet every time I see her, she welcomes everyone with a warm smile.”

Battle admits that the job is not an easy one at times. Asking people to wear a mask has been challenging. While some people comply willingly, she has had to ask those with objections to leave the building.

“I take a lot of abuse here,” she says. “Sometimes, I have to catch myself. I’ll take a deep breath. I’ll shut down. I’m learning to deal and not escalate the situation.”

After her day as a safety officer is done, she works a second job and takes care of her mother.

Battle joined Pittsburgh Mercy five years ago, starting out at Trail Lane Apartments on the South Side campus. From there, she moved to Building 2 and then to the Gatehouse before landing at Reedsdale. Serving at the different locations has helped Battle improve at doing her job.

“I get to see different people and what problems they are going through,” she says. “I have learned to understand what I have to do to help them.”